Redcar roles out the Redcarpet as movie premiere hit town 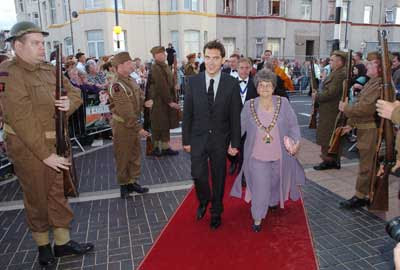 REDCAR was coming back down to earth today after an amazing day of glitz and glamour.
Delighted organisers believe yesterday’s 1940s event to mark the movie Atonement’s official regional premiere couldn’t have gone better.
Hundreds of people packed The Esplanade all day as excitement leading to last night’s red carpet premiere reached fever pitch.
And today, thrilled Redcar and Cleveland Council leader George Dunning said: “I wish we could put a price on what this is worth to the town! It’s a long time since Redcar has enjoyed such excitement. Brilliant.”
Redcar’s 266-seat Regent Cinema held two showings yesterday - the first a community screening, the second last night’s VIP premiere.
A third showing, for the Teesside extras who played such a special part in the film, was laid on at Cineworld Middlesbrough at the request of director Joe Wright. Mr Wright, who escorted Redcar and Cleveland Mayor Wendy Wall into the Regent, said: “Everyone talks about the scene we shot at Redcar but it would be nothing were it not for the generosity and spirit of the local people.”

Posted originally by Chris - administrator on September 6, 2007 on the Middlesbrough Evening Gazette
Posted by www.nick.org.uk at 4:43 pm