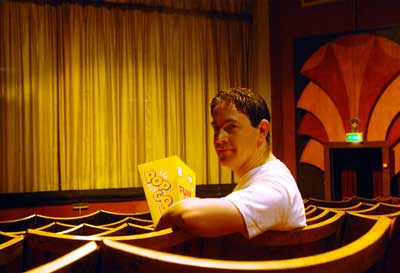 BLOCKBUSTER movie Atonement may have secured a Redcar cinema’s future, its boss believes.
Neil Bates thinks January 6, 2006, will prove to be the key date in The Regent’s history.
For that was the day Atonement director Joe Wright knocked at the Regent door, saying he was interested in making a film.
Twenty months on, the 266-seat Regent found itself hosting the movie’s official regional premiere.
And that, says Neil, shows that cinemas like The Regent have a place in today’s multiplex world.
Sitting in the deserted, 1930s cinema and reflecting on a whirlwind year-and-a-half, he said: “I believe all this has given The Regent a future again and cemented its place as a community asset.
“It’s like the cinema where they shot Peter Sellers’ The Smallest Show On Earth. That survived much longer simply because that movie put it on the map.
“January 6, 2006, was definitely the day which was the turning point for this cinema.”
Only just ranking behind that date in importance was surely September 5, 2007 - the day the Regent was full for two community showings.
But, explained Neil, he prepared unconventionally.
“I did a radio interview at 8am, then I started assembling the print.
“At that point, I said ‘Look guys, you’re on your own now - we’ve got a VIP premiere tonight and I need to buy some shoes.’
“I ran down town, got some and came back to get ready for the afternoon showing.”
Neil insisted on being projectionist for both showings, but he could only begin to relax for the second one - the first time he’d seen the film.
And while he looked on in awe at what unfolded on screen, there was one tinge of disappointment - a fight scene shot in the cinema itself didn’t make the final cut.
He said: “It started in the bar with James McAvoy fighting his way through singing troops, going round the back of the stage and trying to find a drink from a dry tap.
“He then goes on to the stage and spends time behind the screen, beneath images of kissing faces.
“I saw the rushes and it looked brilliant, but so did others and they’ve been left out too.
“But there was so much good stuff and at the end of the day, it’s Joe Wright’s call.
“Hopefully it will all end up as DVD extras.
“But the film itself is wonderful, a work of art. When the Redcar scenes came on, everyone was mesmerised - including me.”

Posted originally by Chris - administrator on September 7, 2007 on the Middlesbrough Evening Gazette website
Posted by www.nick.org.uk at 1:01 pm

Though I love romantic English movies and adore James McAvoy, I'll admit to seeing "Atonement" only for the 'Redcar' scenes. I'm a Yank who stayed in Redcar for 4 weeks in 2004 and saw the movie "Harry Potter and the Prisoner of Azkaban" at the Regent. I fell in love with the Regent instantly. It felt like home, and I could sense a wonderful history about the place. Strangely enough, during the movie "Atonement", I only began crying when the scenes of Redcar Beach and the Regent Cinema came up during the film because I miss being there. Many people still don't like the mega-huge cinema multiplexes of the modern day and would prefer to enjoy a movie in a real cinema with character and architecture, built decades ago that has been enjoyed by generations of families, and carries priceless memories. May the Regent live on through many more decades to come. Kay Brown

Yes it's a great cinema Kay. You can listen to an interview I did with Neil Bates (the manager)if you click on the 2008 podcast area of this site. Nick